The SENTINEL-2 satellite is for optical Earth monitoring. It is the second member of the ASTRIUM (nowadays AIRBUS DEFENSE & SPACE) Copernicus (formerly GMES: Global Monitoring for Environment and Security) set where the Sentinel unit runs a high resolution Multi-Spectral Imaging Instrument (MSI).

Optical sensors ranging a wide spectrum (0.4-2.4 µm) at a resolution around 10 meters scan a 290 km wide zone simultaneously at a 786 km orbit. Light from each scanned ‘dot’ will face several sensors (13 channels), separate in the visible and infrared ranges. Positioning tools will drive optics to aim with 20m (on surface) precision.

Two Sentinel-2 satellites synchronized (with constantly altered orbit) can cover most of land surfaces every five days, while cloudless clear record is probable in every 22 days. The ensemble analysis of the spectral channels will provide vital data on the atmosphere, waterfront movements, water and chlorophyl content of greenery, volcanic phenomena and human influence.

Creating and running Sentinel-2 rests on the joint success of engineers and scientists from several nations united by Astrium. Friedrichshafen gives place to platform-integration and test planning, the optical unit (MSI) is being built in Toulouse, the structure, thermal and electrical units in Spain. Subsystems and third level equipments are provided by a wide supplier net. 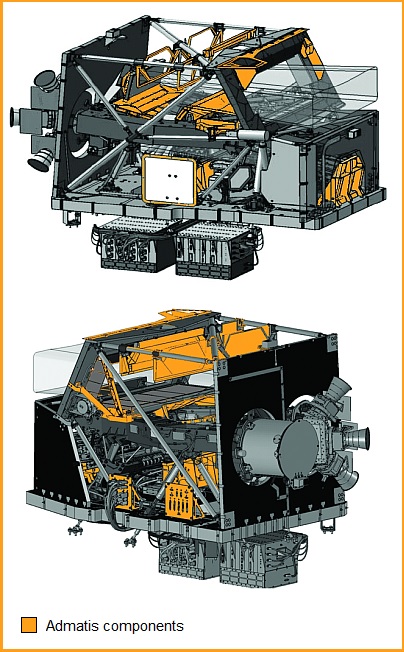 Admatis designed and procured mechanical and thermal equipments for MSI such as brackets for electronics (with radiators), thermal shields and baffles. The twin-satellites have been serving the ESA and EU since 2012.

SENTINEL satellites allow global and dynamic Earth observing through virtual models that will have great effect on agriculture, sylviculture, industry, transportation and energetics.

The MSI project ended in 2013. After shipping of the hardware, the assembled satellite was tested for two years. The first Sentinel-2 satellite was successfully launched at 23 June 2015. Just four days after being lofted into orbit, the satellite delivered its first images of Earth.

In 2015, ESA announced that new models of the satellite (Sentinel-2C and Sentinel-2D) will be manufactured. The Metallic Mechanical and Thermal Hardware also was created in Hungary, with the technical leading of ADMATIS.